Yoga Injuries: Is Our “Transcendental” Approach to Blame? 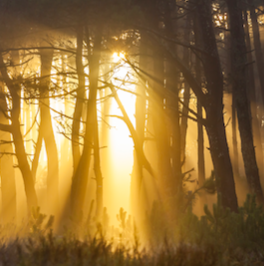 Matthew Remski was mystified. As he considered the circle of friends and colleagues he’d developed through years of training and teaching yoga, it occurred to him that he couldn’t name a single person who wasn’t dealing with yoga injuries.

That realization, coupled with his own unique past and a great deal of research, has prompted Remski’s upcoming book “What Are We Actually Doing in Asana?”

The book is not only an examination of yoga-related injuries, but it poses a larger ethical question: Is the mindset that yoga can create a transcendental experience putting the physical and mental health of our students at risk?

Remski’s analysis started anecdotally. He noticed yoga-related injuries were ubiquitous among friends and colleagues who had practiced Yoga for years. “I couldn’t think of anyone who didn’t have some fairly serious reports about the adverse affects from practice,” Remski said. 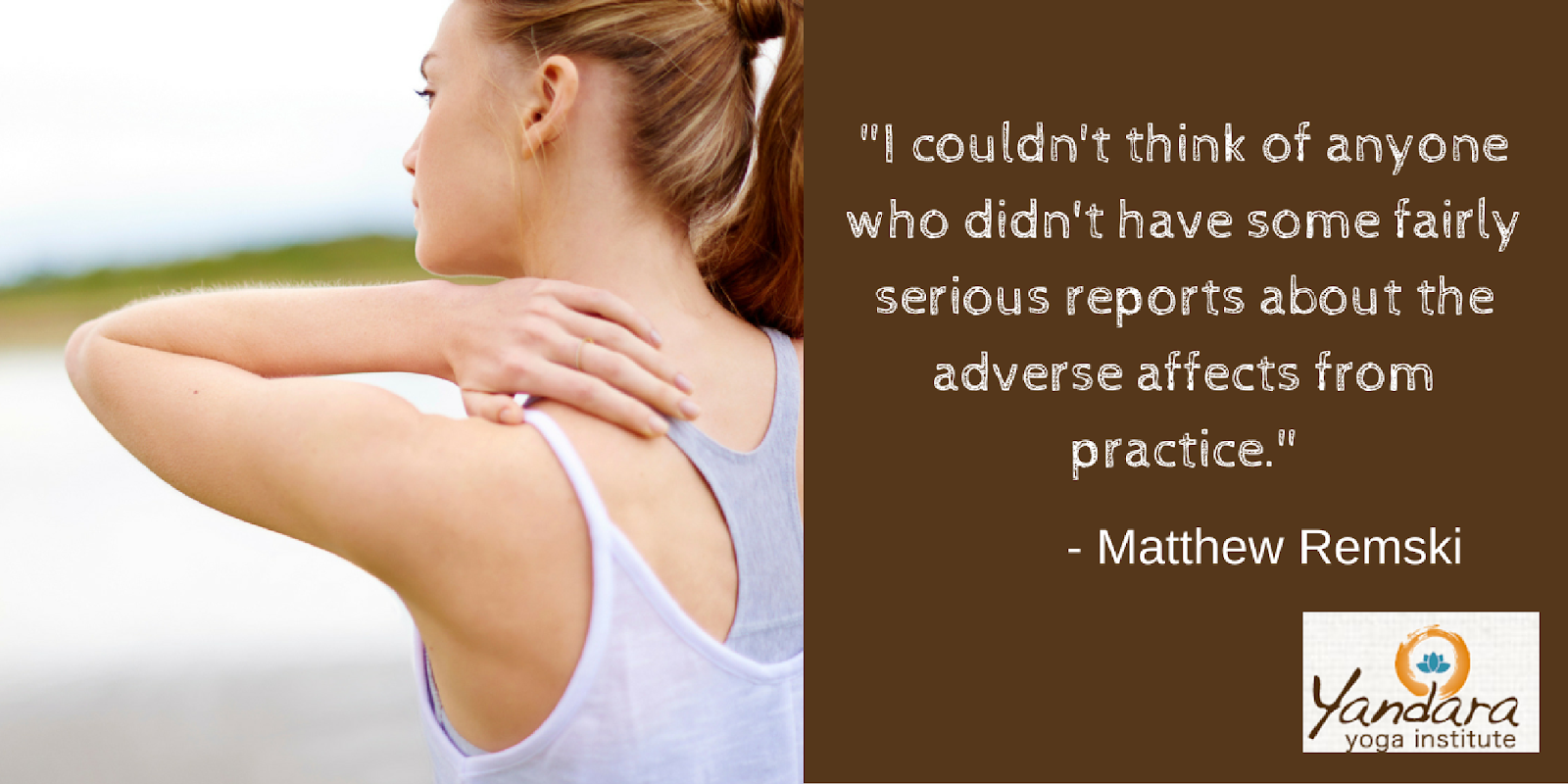 It caused him to question Asana Yoga’s educational culture, which he likens to “old school parenting.”

So why, in the cases of lifelong practitioners and teachers of yoga, were the injuries piling up?

The Strength Bias and the Benefits of Stiffness

Remski would be the first to tell you his tally of injured colleagues is purely anecdotal, but even in his small sample size, he noticed similarities in the nature of the injuries.  They all seemed to include:

The injuries came from people working at the end range of motion in “really aggressive ways to increase flexibility.”

Remski found that the tissue damage and joint instability injuries were related to the “openness bias,” which he described as “being able to move joints to the end range and keep them there, like a testing ground for psychological balance.”

He believes this emphasis on the Openness Bias overrules the Strength Bias — pushing yourself too far and ignoring the signals from your bodies, resulting in rotator cuff injuries, back injuries, neck injuries and more.

“There’s a lot of virtue to stiffness,” he said. “But we’re ignoring those values.” 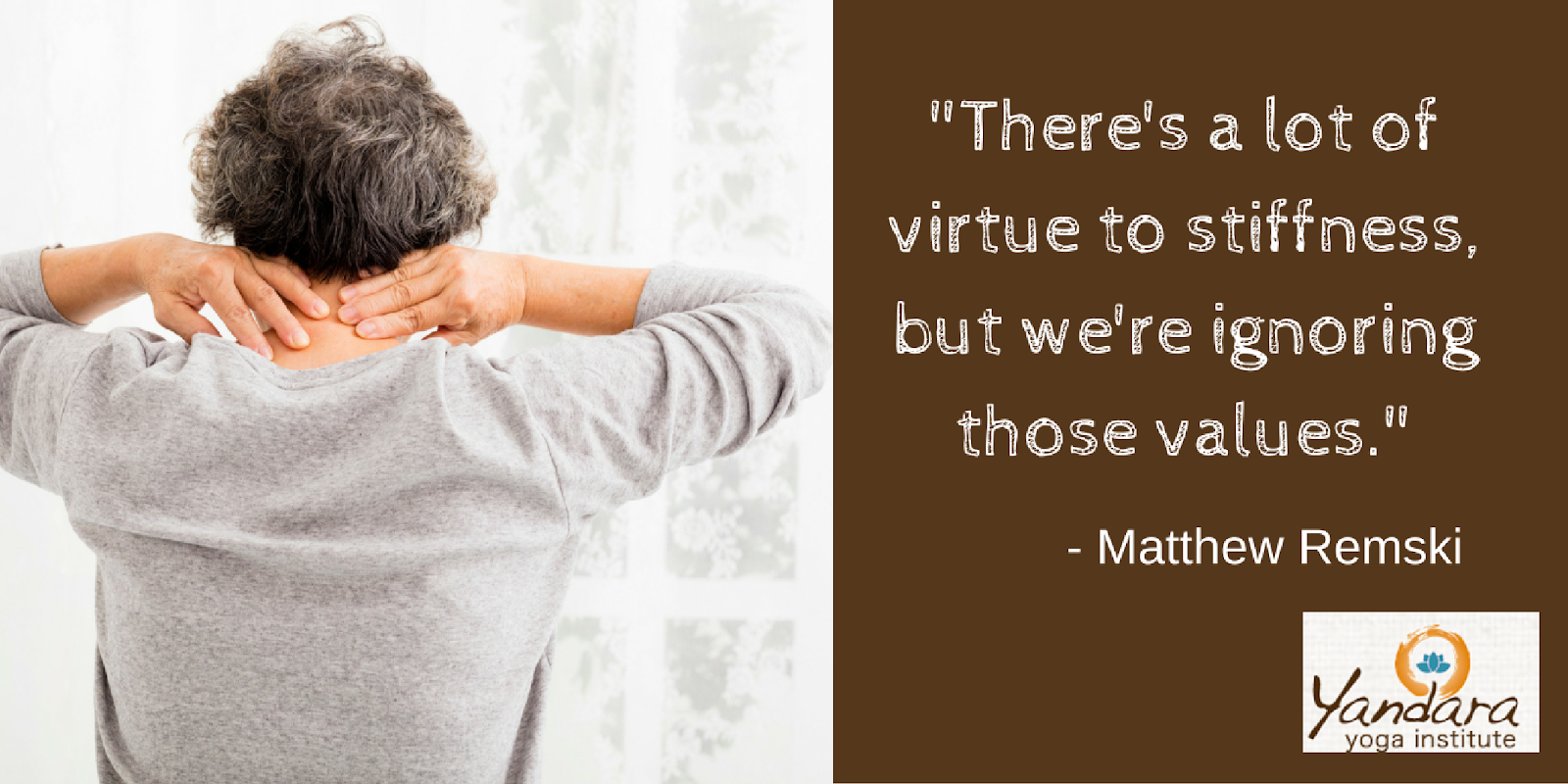 The problem, Remski surmised, is about the lack of variation in the Asana vocabulary, and the way the movements are strung together.  “It’s really rooted in some thinly veiled religious or spiritual ritualism,” he said. “It suggests that a repeated action can be purifying.”

This gets to the heart of the issue — the marketing, intentional or otherwise — of the transcendental benefits of yoga versus the therapeutic benefits.

Transcendental Benefits – A Blessing and a Curse

Many people are drawn to yoga for relief not only of physical pain, but mental pain.  According to Remski, the yoga culture projects these therapeutic aspirations. However, the “transcendental” benefit has been confused with “therapeutic.”

“There is an implicit message that a certain posture has particular psychological virtues that will be healing in some ways,” Remski remarked.  A way of breathing, for example, is presented as something that will be transformational.

And perhaps, for some, it is. The conflict arises when you push people through a level of discomfort and assure them that the pain will be “worth it.”  It’s problematic because many who come to yoga have their own emotional baggage and are looking for a source of relief.

“People who are looking for relief physically and mentally are really suggestible,” Remski said. “And the discomfort and pain may be viewed by an overly enthusiastic practitioner as a virtue.” 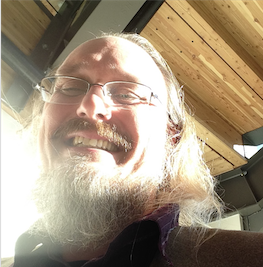 Listen to this interview with Matthew Remski on the difference between therapeutic and transcendental.

Can a Changing Yoga Industry “Heal” Itself?

Yoga continues to expand in terms of popularity, as more fitness centers offer increased class options and high-profile athletes like Aaron Rodgers of the Green Bay Packers embrace its benefits.

This has led to an increase in the presence of trained physiotherapists, who bring an objective analysis to practices that encourage 90-minute to 2 hour long sessions of repetitive stress on joints and tissues. 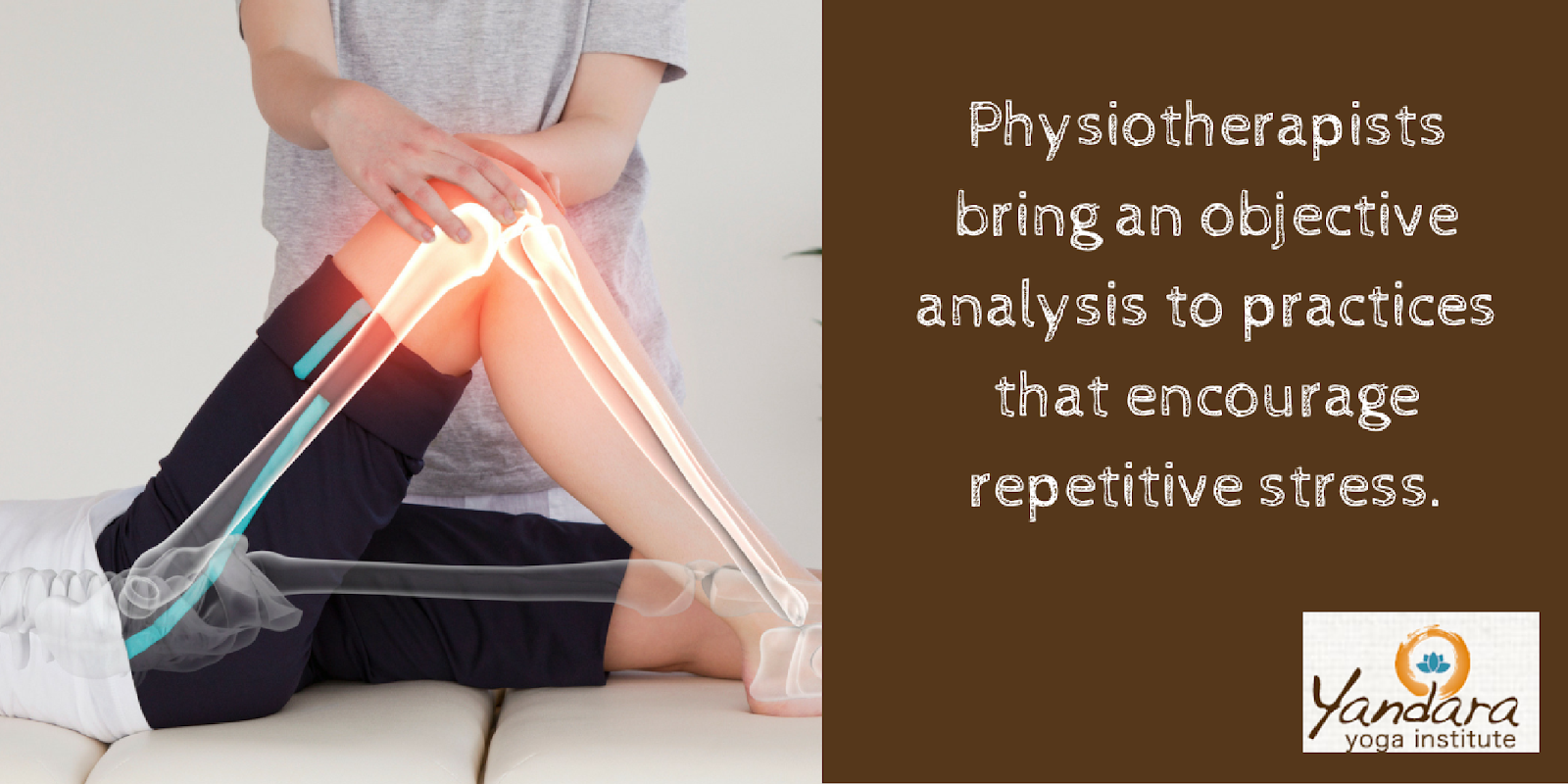 “They’re saying, ‘Yeah, I don’t think it’s a good idea to put your leg behind your head,” Remski said.

It’s a criticism at-odds for yoga “purists” who believe that the more athletic leanings of newcomers to the field are escaping yoga’s true meditational roots. But that’s exactly where the transcendental and the therapeutic becomes confused, and the injuries begin.

Therapy Emphasizes Treating the Body “As Is”

Modern therapy addresses the body and self “as is,” Remski said.  It accepts the body’s condition and its range of motion.  The principle of therapy is to work with this material as the substance of development to improve a person’s life, at which point therapy becomes a success.

That’s in contrast to the transcendental promises of Yoga. “Yoga as a transcendental therapy is not about improving the self as is, but transforming the self,” Remski said. This is a much more austere, time-intensive task. In fact, it never ends.

Consider the questions, religious in nature, that naturally follow. Am I becoming enlightened? Am I awake? These are questions with no end point, and are perhaps unattainable.

The narrative that practitioners are creating has an enormous potential for disappointment, because this never-ending quest for a transcendent state of being is like dangling the carrot of immortality in front of students.

“Yoga aspires to solve the problem of death,” Remski said.

Remski’s Past: Sensitivity to Cultic Organizations

A closer examination of Remski’s own background reveals the roots of his concerns with modern-day Yoga. Remski is a two-time cult survivor, and the experience has left him sensitive

to organizations based on cultic principles.

While he doesn’t call Yoga a cult, he does note the yoga world exhibits a cult-like inspirational structures in the way it organizes around charismatic figures.  “If you point to every major lineage of every yoga brand, at the center will be some sort of charismatic leader,” he said.

The figure has “some special knowledge that they alone hold.” He refers to the long trips people make to train and learn from spiritual leaders, and the notion that these leaders must make “contact” with you to impart their spiritual wisdom.

What Does the Future Hold?

Can this paradigm be reversed? More importantly, do practitioners like yourself want it changed? 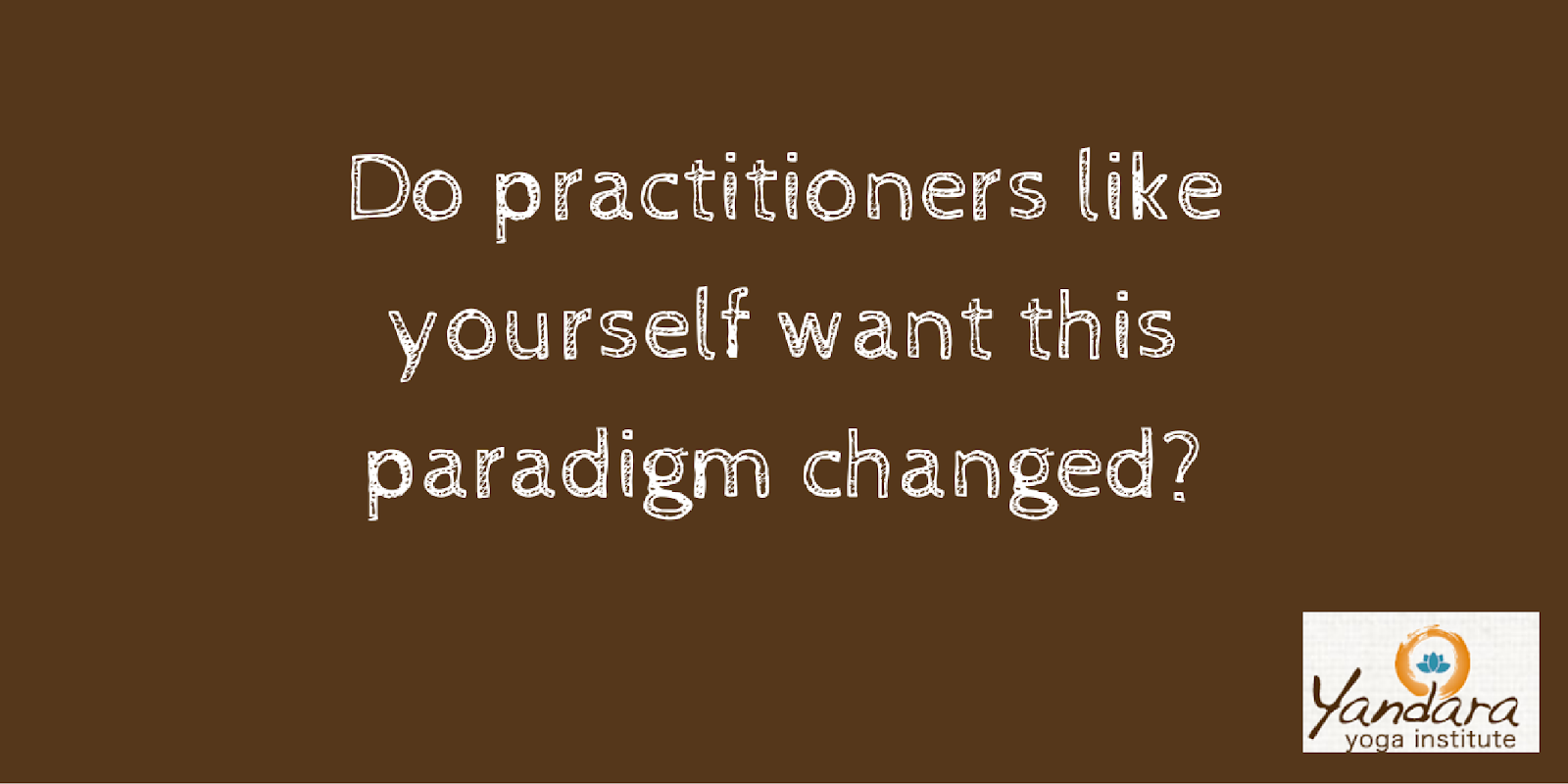 Perhaps some do. As more training programs begin to integrate bio-medically trained professionals, some of the physical dilemma will “sort itself out,” Remski said.

However, the conflict between therapy and transcendental benefits — that’s a bigger question and much more complicated.  Preventing people from become enthralled in a charismatic leadership can only lead to — gulp — regulation, which Remski as a “swamp of farts” for yoga.

As a result, there doesn’t appear to be any type of standardized solution, at least not in the market-driven, regulation-wary US. “I don’t see it happening,” Remski said.

The impetus thus moves beyond federal and state regulation. It moves to you, and the ethical decision of every individual instructor.  Where do you stand? What’s your personal approach? We’d love to hear your thoughts in the comments below.