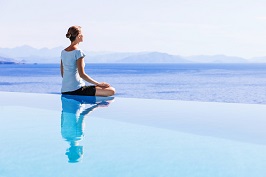 YogAlign is a method of doing yoga that breaks from many of the traditional approaches of instruction. We take a look at its origins and talk to Michaelle Edwards about the benefits of “pain-free yoga” from your inner core, and the “cult of flexibility” she says we must leave behind.

In our previous post, in which we highlighted a study from Yoga Alliance, Andrew Tanner said, “The best yoga teachers are yoga students.”

Being a great student means expanding your mind and discovering new techniques, methods, and in the case of Michaelle Edwards of YogAlign, new approaches that work with postural realignment via yoga poses based on neuromuscular and functional movements in daily life. 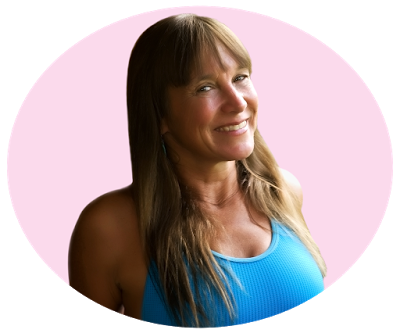 The focus in YogAlign is to do yoga poses that realign posture and retain the natural curving structure of the body. The emphasis is on postural alignment rather than alignment of a pose. It’s an approach that can prevent injuries, both in students and in yoga teachers.

Prepare to open your mind to a different approach

When we interviewed Michaelle, she cautioned that not everyone will agree with her message. She even advises her students not to believe a word she says. “You must create a ‘knowing’ in your body and do poses that work globally in the entire structure,” she said.

We appreciate her words of caution, but this blog isn’t about championing one viewpoint over another — it’s about expanding everyone’s knowledge of yoga and considering different mindsets.

That being said, for many instructors, including us here at Yandara, you may find Michaelle’s approach and attitude a bit disruptive. But like Uber and Lyft reinventing the cab system in America, sometimes disruption can be for the best.

Michaelle is not a newbie to the yoga world.  As she says, “I started yoga in ‘72, back when there wasn’t a yoga studio on every block.” She practiced asana and lived a yogic lifestyle for 20 years before she began to teach yoga. 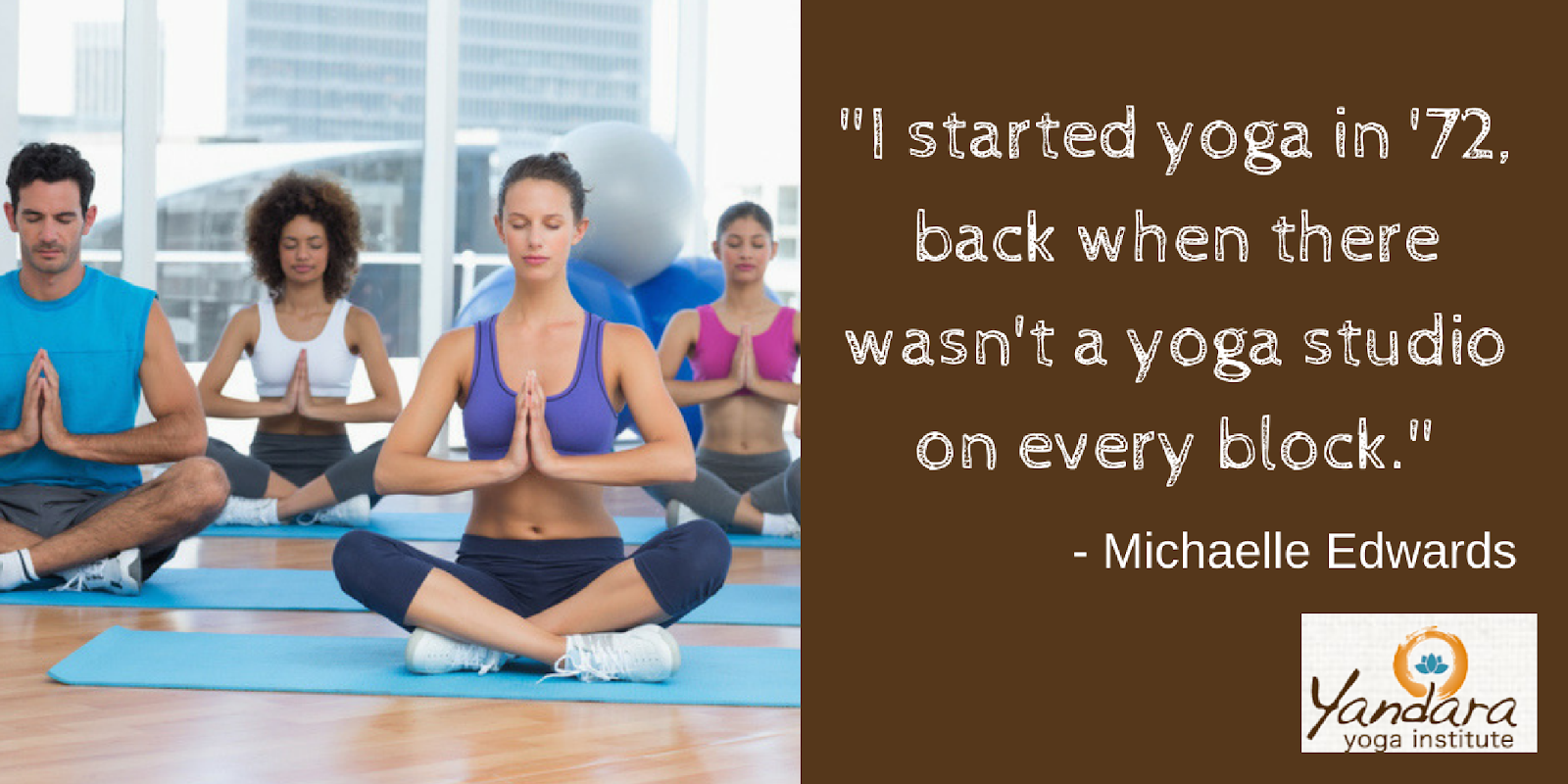 These were the days when people were serious about the yogic lifestyle. Typically, practitioners only did yoga poses for an hour a day — it was more about the philosophy and lifestyle.

Times have changed.  Yoga has boomed from 20.4 million practitioners in 2012 to 36 million today. It’s more about fitness. There is less meditation in classes and more hip-hop. “It’s basically like the world of dance,” Michaelle said. “There are so many different ways and approaches.”

The cult of flexibility

The evolving and expanding landscape of yoga practitioners was one of the reasons Michaelle created YogAlign.  She notes that many yoga classes are “elitist,” that you have to be young and flexible.

“There is a cult of flexibility,” she said. “Can you go further? Can you do more?”

That cuts against the grain for Michaelle, considering her background. She’s a professional massage therapist, with an extensive background working with people who have musculoskeletal conditions. 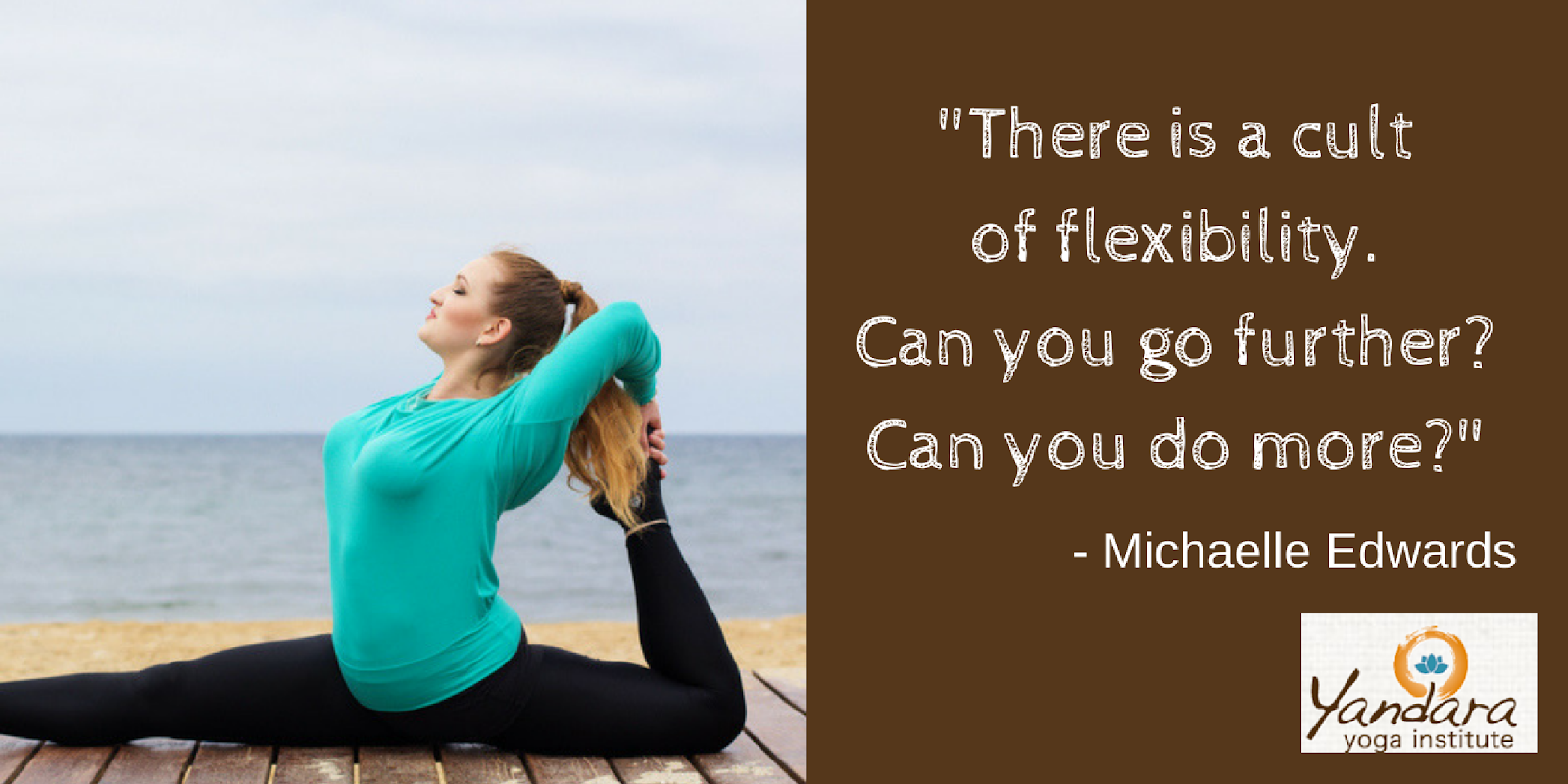 She found that many clients were suffering from knee and hip injuries.  “As I did my research, many of these injuries had to do with poor alignment,” she said. “A lot of injuries and chronic pain are the result of poor posture.” (Poor postural alignment is the reason for most chronic pain conditions in the body, as well as more injuries.)

What didn’t make anatomical sense to Michaelle was the fact that so much of yoga is based on pushing people “forward.” Because so many of us sit in chairs, our bodies are hunched forward, which contributes to an premature aging and the epidemic of back pain in America. Also, many yoga poses position the body in the same right angle as chairs, undermining the natural curves of the body needed for stability and shock absorption.

“Many people in the Western world have weak back muscles and shallow breathing habits that  lead to chronic pain and illness,” she said. “YogAlign is designed to get people back to the midline of the body where humans can move naturally from the core center.”

Here are some examples of before and after photos with people who have done YogAlign. Note the forward slump. 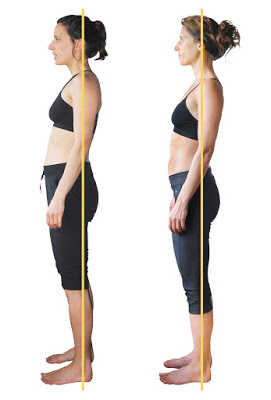 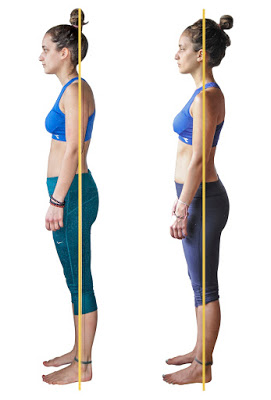 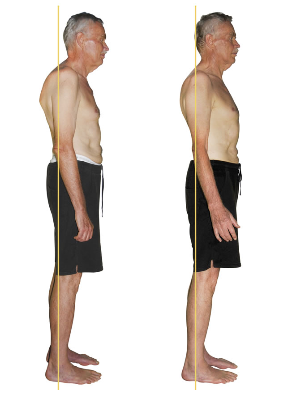 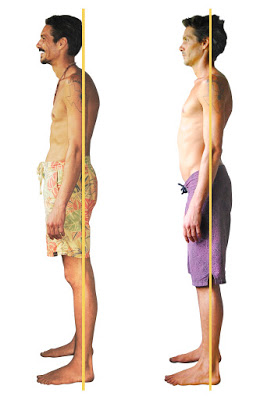 She explains that if we continue to make the stretch in the neck and lower back flat, the ligaments will become lax, leading to joint deterioration and forward posture.

Many yogis overstretch the ligaments of the sacroiliac joint and create chronic inflammation and a flat lumbar/sacral platform. The 30-degree sacral nutation is necessary to distribute weight from the upper to the lower body evenly, much like the construction of an archway in architecture.

“The sacrum is balancing,” Michaelle said. “If you loosen it, it creates a breakdown.” That’s why so many veteran yoga teachers have characteristics like a flat butt and knees that go back.  It’s also why she and Matthew Remski have noticed so many injuries in yoga colleagues.

The socio-cultural phenomenon: Why are so many women in class?

Have you ever noticed that women typically make up 80% of your class? There are many reasons why attendance is disproportionately female, but Michaelle believes that women are simply more flexible because nature designed us this way.  “We have more elastin and relaxin hormone production which allows the ligaments in our hips to be more flexible for childbirth.”

Men will say, “I don’t bend that way.”  “Men have strong extensors in the back and gluteal muscles — and that’s okay because this line of pull in the body keeps one from going forward,” according to Michaelle. 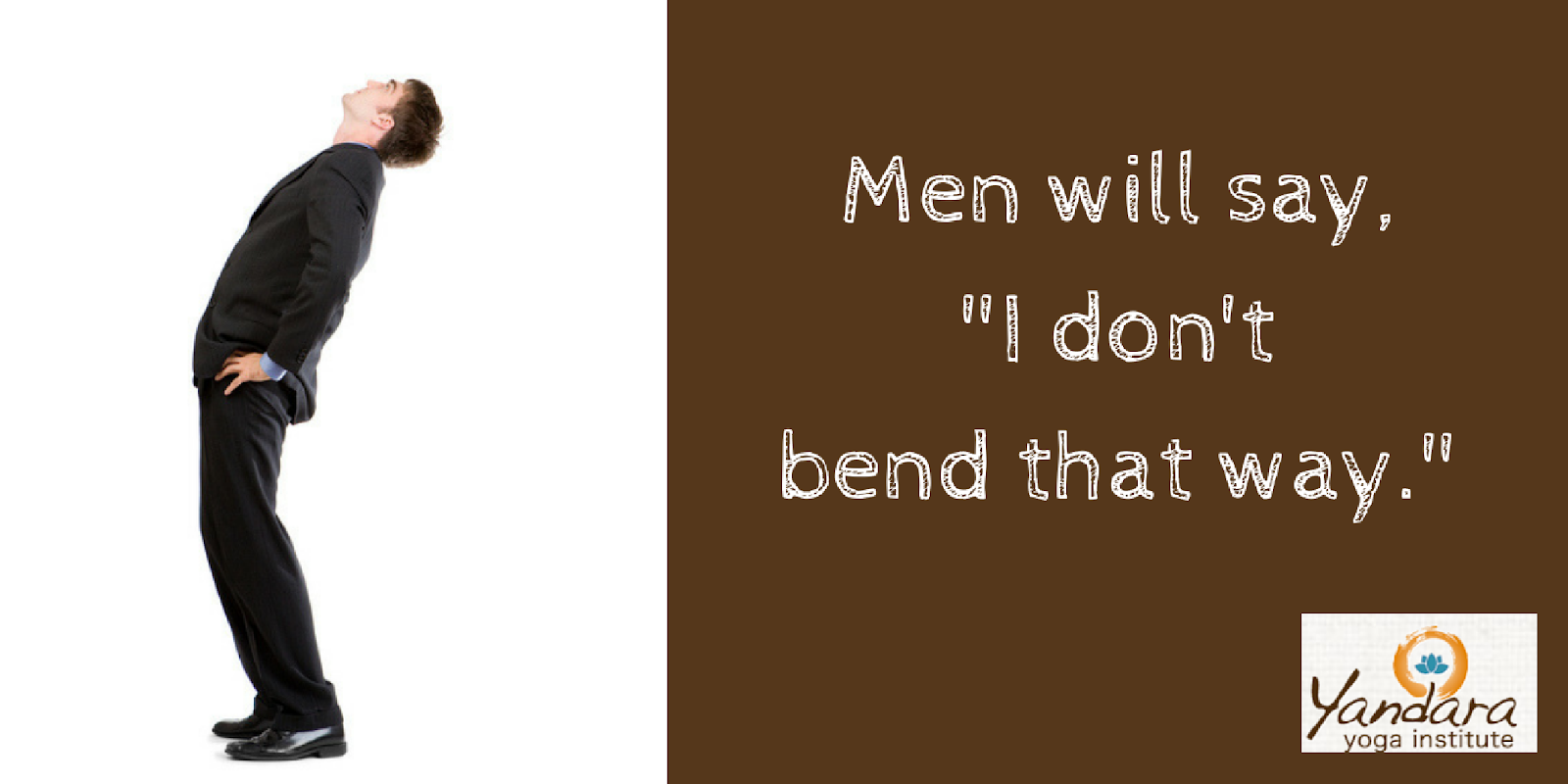 She explains how when you’re a fetus, you’re all rolled up in the C-shape with no spinal curves. When the nerves in the back mature, the baby is able to lift his chest from the floor and recruit the extensor muscles in the back body which pulls the lumbar and cervical curves into place and  allows the baby to eventually stand up and walk.

These back muscles run from the forehead, down the back all the way to the arch of the feet creating a natural line of pull to resist the flexors in the anterior body.  “You don’t want to pull on those natural curves,” she said.

Men who follow Michaelle’s YogAlign approach like it because it doesn’t hurt.  “They feel really good, because they don’t have to do anything that’s uncomfortable,” she said.

Why you don’t feel yoga injuries right away

Oddly enough, pain from a yoga injury doesn’t occur right away.  You might be extending during class, and everything feels fine. But when you’re walking the dog an hour later, you feel the pain.

This a “blind spot” for yoga teachers, Michaelle says.  It occurs because you’re loosening tissues and ligaments in the body, moving contrary to how the body is supposed to work.  “Animals don’t stretch,” she said.  “It’s not natural to hold a stretch for minutes.”

She believes that being able to flop over with knees straight is actually a “pathology.”  She avoids any types of poses that flattens the curve of the sacrum.  Listen to this expert interview to hear the types of yoga poses she recommends. 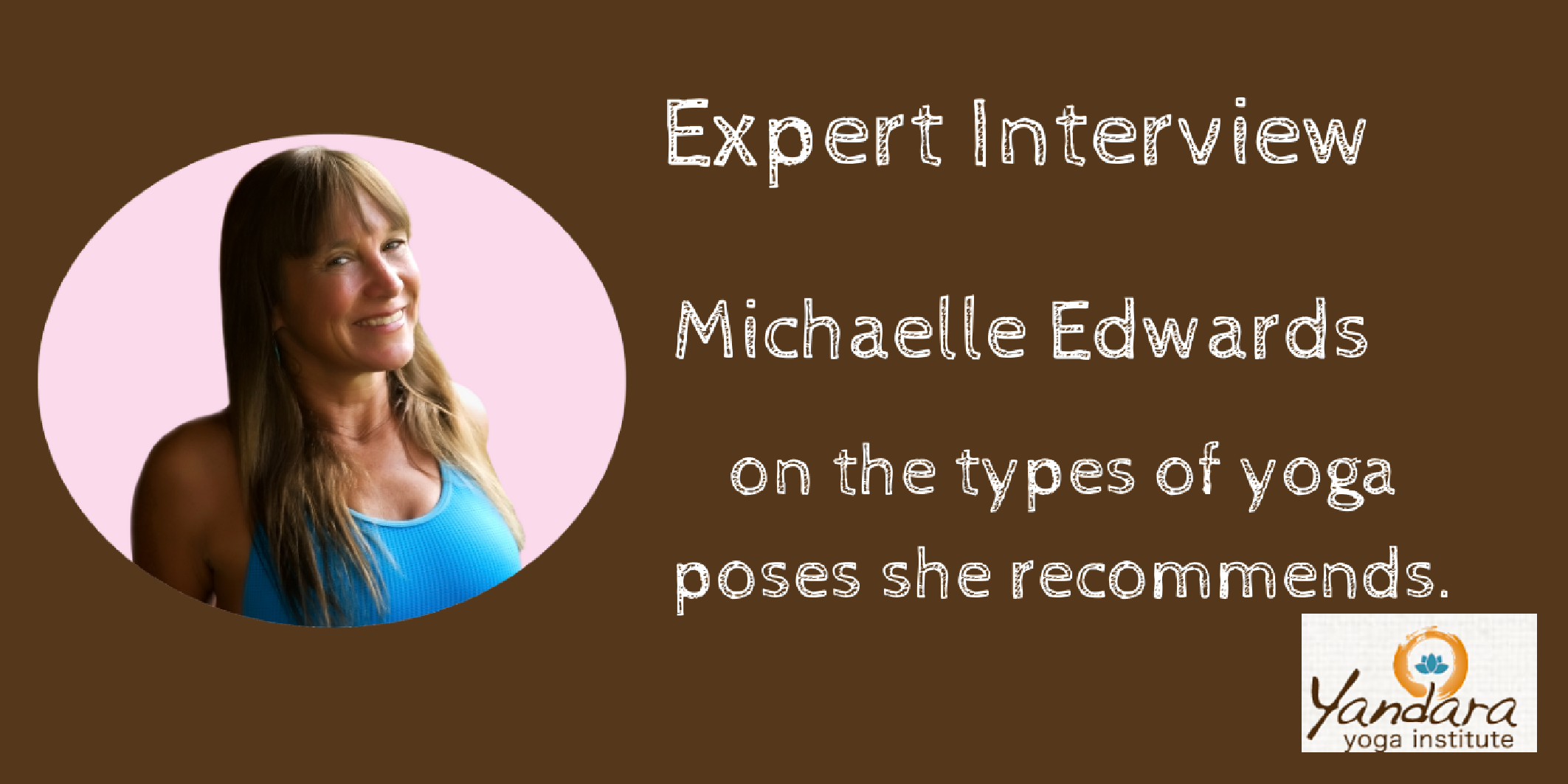 How to make yoga poses safer

To avoid the “blind spots” that can cause yoga injuries, Michaelle offers the following tips:

Have you ever noticed how difficult it can be to maintain a steady breathing routine during yoga? That’s because your body is struggling with the position and won’t allow you to breathe in a relaxed manner.

In the YogAlign approach to breathing, you sometimes use a focused breath technique done through the mouth.  When you stand tall, the exhaling technique involves uttering a certain syllable. The goal is to train your trunk muscles to activate primarily as stabilizers to support the body in upright alignment.

Many yoga poses stretch the hips, the butt and the ilium. But these are the things that keep you upright. Laying in pigeon pose for an extended period of time is an example of over-stretching hip muscles.

Sometimes yoga practitioners get sciatica because they overstretch their nerves.  Nerve tissue is not meant to stretch more than 10%.  Strengthen your glutes and avoid the poses that are compressing or stretching nerves. 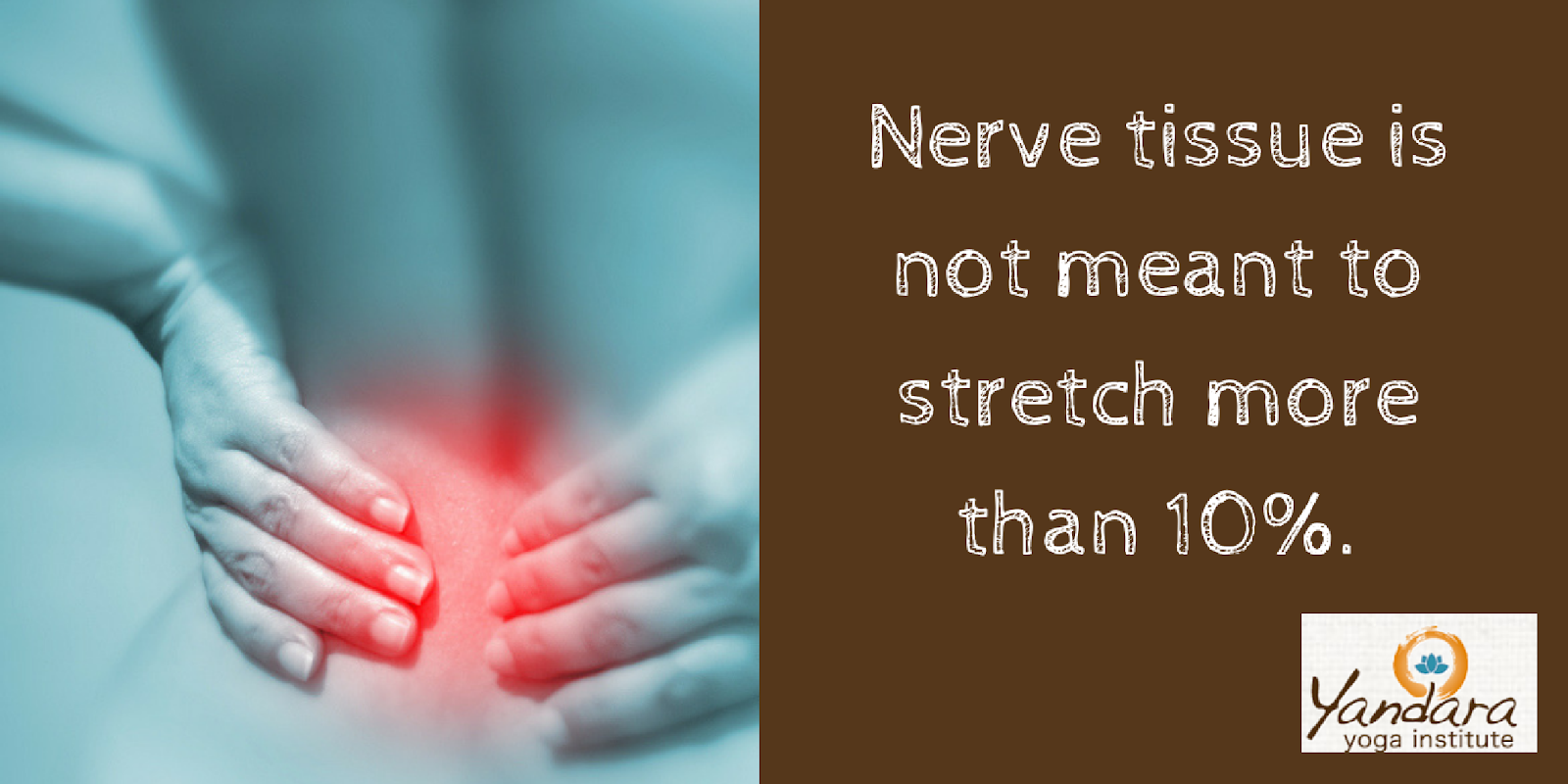 An opportunity to grow your business – and help more people

As encouraging as the growth of yoga is in America, Michaelle believes there are even more people who can be helped. Without doing anything dangerous or uncomfortable, she’s seen “people in their 80s get huge results.”

And if 80% of your class is women, just think what it would do for attendees if your approach catered to men as well.

For the industry as a whole, Michaelle would like for yoga to become more scientific and make more “anatomical sense.”  She also cautions that if yoga injuries become widespread (and she cites numerous examples of younger women suffering hip problems), the industry could eventually become regulated.

People can get injured in any sport, but that’s not the intent of yoga.  “It’s a healing modality,” she said. “The fact that there are any injuries at all shows you that something is wrong.”