The Power of the Sanskrit Language in Yoga 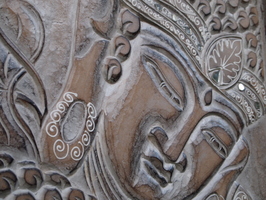 For Yoga beginners and enthusiasts alike, one would often hear Sanskrit words or phrases that sometimes seem like out of this world.  Many people are still not familiar with Sanskrit and they do not understand what it is and its relevance to Yoga.

Sanskrit is considered to be the very origin and the oldest language recognized by man. It is said to be where all languages have evolved or arisen. In fact, Sanskrit was the language used in the earliest accepted scriptures of the human race or the “Vedas”.  The Indians firmly believed that during the Vedic period (about 6,000 to 8,000 years ago) the Devas or the God’s language was Sanskrit and so it was also recognized as the Divine speech or as the “Daivi Vak”.

The language became more apparent in the 7th century BC.  It is during this time when Panini, the great grammarian, systematized this language with his grammar and from then on it was referred to as “Samskritam”.  Popular and important numerous classic literatures on philosophical, spiritual, cultural and scientific texts (including physical sciences, astronomy, architecture, astrology, and medicine) used the Sanskrit language as their means of expressing, sharing and recording their views, thoughts and ideas.

The Significance of the Sanskrit language

Quantum physics explained to us that any object or phenomena consists of vibration that has its own composite or unique patterns.  As such, it is believed that the Sanskrit language originated from Universe’s vibration. Each Sanskrit word has its own inherent sound.  If an individual’s mind is free from anything and is utterly pure then it can replicate the exact figure or object’s image when they hear the Sanskrit word.  The same thing happens when the Sanskrit word is pronounced perfectly, this occurrence has the power or influence to manifest the particular image or object in one’s mind.  It is for this reason that the Sanskrit language was referred to as the perfect language.

This is why you would often hear a chanting of the mantra and during the Vedic era it was regularly practiced because it is the core of the Sanskrit language. However today there are only a handful of people who are not aware of the essence of perfectly enunciating the Sanskrit words.  Moreover there is lesser number of individuals who keep a pure mind.  At this rate, most people are experiencing a hard time creating the images in their mind.

Yoga is all about joining and creating a harmonious relationship between the body and mind together for a healthy and balanced state of being.  Yoga has become a philosophy and a spiritual approach to anyone who wants and needs self-contentment and pure blissfulness.  As Yoga began to be popular in the modern Western world, the Sanskrit language became less and less visible or known. People who are in Yoga today are not even aware of the Sanskrit language’s underlying power which has led to lack of understanding.  So to re-educate everyone, it would be important to at least know the basic Sanskrit Yoga words:

Asanas – This word refers to a series of poses or postures designed to groom the mind and body for meditation.

Chakra – This refers to a person’s sacred energy-centers.  There are seven energy-centers in an individual’s body where vital energy is stored and released.

Namaste – This is an Indian traditional greeting  which expresses respect and honor the divine presence in the individual they are greeting.

Pranayama – Refers to the breath awareness and exercises fundamental to Yoga.

Yogi – Signifies a person who is proficient, mastered the practices, and teaches

Prana – Refers to the vital life force or energy that flows through the body.