The History of Yoga I 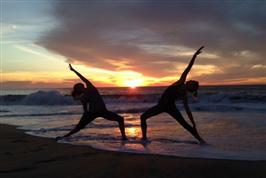 To literally translate the word Yoga, it means “to join or yoke together”.  Creating a harmonious experience by bringing the body and mind to work together had been the reason for its popularity.  Individuals who wanted or yearned for an amplified self-understanding, good health, and better personal freedom paved the way to a meaningful and successful search for a system of mental and physical exercise which became known all over the world.

Many people think that Yoga is established as part of the Hinduism religion.  On the contrary, it was the Hinduism religious structures that borrowed Yoga’s ways and the religion evolved.  Later on, Hinduism incorporated Yoga’s practices to their structure.  It is also in this same manner that all throughout the world, other religions embedded Yoga’s ideas and practices into their system.

WHEN IT ALL STARTED

There is really no specific or exact date when Yoga started but it definitely precludes written history. However there were evidences of Yoga that was unravelled in the stone carvings which depicted Yoga positions figures.  These stone carvings were discovered in the Indus Valley archaeological sites.  Archaeologists predicted that it might have been there for about 5,000 years or more and so it was believed that Yoga has been practiced even in the ancient times.

It was around the period 1st century BC or 5th century AD that the scholar Patanjali compiled the Yoga’s earliest texts setting down the most widespread practices and theories of Yoga of his time. His book was titled Yoga Sutras or the “Yoga Aphorisms” which described the “Ashtanga Yoga” system or Yoga’s eight limbs.  This system is better known today as the Classical Yoga.