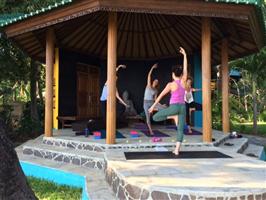 If one wants a workout Yoga then Ashtanga is your type of Yoga. Unlike the Hatha, Ashtanga is more intense, fast-paced, and physically demanding.  Credit for this type of Yoga should be given to the one who developed it – K. Pattabhi Jois.  In Sanskrit, the word Ashtanga means “eight limbs” and it refers to the eight limbs of Yoga from the Patanjali Yoga Sutras. In Ashtanga Yoga, the poses are performed in a set of series with constant movement one after the other. Basically, the physical benefit that is gained from this style is endurance, stamina, flexibility, and strength.

B. K. S. Iyengar is one of the famous yoga teachers and the proponent of this style. Iyengar Yoga is more concerned with alignment of the body and paying greater attention to detail when performing the poses. Alignment is also very important in Yoga as it teaches the body to pose in a precise position to acquire the maximum benefits of a certain pose and also to prevent possible injuries.  The poses of Iyengar yoga are held for over a long period and in the transition to another pose it would require one to move quickly. This type of Yoga supports the use of props like straps, blocks, and yoga blankets to enable the alignment of the body.

Building body-mind connection with emphasis on breath in union with the body movement is what Kundalini Yoga.  The general aim of Kundalini is to activate the unused energies from within the chakras of the body to strengthen or enhance the life force.  This form of Yoga also involves chanting and puts great attention to the breathing control to allow the flow of energy upwards from the lower body.

One may already get the idea what Hot Yoga is from the adjective itself.  Bikram Yoga is practiced in a steamy room with a temperature set from 95-105 degrees Fahrenheit (with 40% humidity) that will allow tight muscles, tendons and ligaments to loosen up and toxins to be cleansed away.  With a hot room, sweat will profusely flow from the body which is considered the body’s pollutants. This method practices a series of 26 poses.

In Canada, a style called Moksha Yoga has developed out of Bikram Yoga.  It is also practiced in a hot room and has added a number of postures, it totals to a series of 40 poses performed.