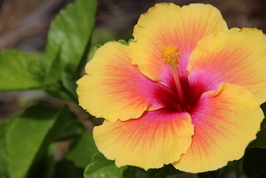 You may not think about a religious conflict when you head to your yoga class each week; there are some spiritual elements to it, taken from the Eastern religious traditions where the practice originated, but the Sun Salutation is hardly a rousing sermon. However, a recent lawsuit out of California has shone a light on concerns about yoga’s Hindu, Buddhist, and Jainist roots, and has brought Christian-based yoga to national attention.

Several schools in the Encinitas school district of California have implemented mandatory yoga training program for teachers this year, which showed them how to incorporate basic yoga moves and breathing exercises into their classroom. Yoga gets the kids up and moving around in a structured manner and teachers say that the exercises are highly beneficial for the children. The poses are renamed so that elementary age children can understand them, and teachers report that their pupils are calmer and more focused after the practice. Nonetheless, concerned parents have joined with the Christian civil liberties organization National Center for Law and Policy, filing a lawsuit to stop the classes; they claim that Ashtanga yoga promotes Hinduism, and violates the constitutional separation between church and state.

Any yoga practitioner will tell you that the exercise has nothing to do with religious devotion, but the Encinitas controversy has definitely revealed that some Americans worry about how the practice can be compatible with their faith. Even though there are virtually no religious aspects to modern yoga, some scholars believe that it is fundamentally incompatible with Christianity. Even so, many people acknowledge that the physical movements and breathing exercises are physically and emotionally beneficial, and have developed a niche version of yoga that disposes of the Eastern spiritual elements and replaces them with Christian concepts instead. The body-as-temple philosophy from Christianity, for instance, is a good way to approach yoga, which reconnects the mind with the body and helps the faithful feel the presence of their God all around them. Christian yoga classes are springing up in cities around the United States; Holy Yoga, for instance, trains instructors to teach poses in their native language and include Christian Scripture quotes during meditation. They have 590 trained instructors in 10 countries all over the world.

Of course, there are many skeptics who wonder why yoga needs to be adapted to Christianity, after all, it’s not a religion and no one should fear non-consensual conversion by doing a Downward Dog. When yoga first became popular, it was a mysterious new exercise, exciting and otherworldly. Nowadays, yoga is quite mainstream; it’s been proven to work as therapy on everyone from army veterans to pregnant women. The National Institute of Health estimates that yoga is practiced by at least 20 million people in the United States and about 8% of adults have taken at least one class. One of the core tenets of yoga is open-mindedness and acceptance; it’s prudent to acknowledge that Christian yoga allows people to practice comfortably, and access all the healthy benefits of a yoga class on their own terms.

While the Encinitas school district lawsuit may be based on unfounded fears, American yoga should be open to new interpretations and welcome new students, whatever their faith.